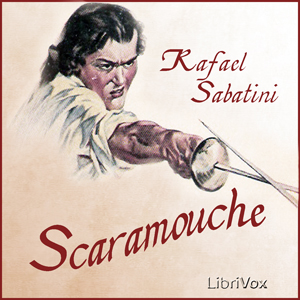 Scaramouche is a romantic adventure and tells the story of a young aristocrat during the French Revolution. His successive endeavors as a lawyer, politician, actor, lover, and buffoon lead his enemies to call him "Scaramouche" (also called Scaramuccia, a roguish character in the commedia dell'arte), but he impresses many with his elegant orations and precision swordsmanship. The later film version includes one of the longest, and many believe, best swashbuckling sword-fighting scenes ever filmed.

The novel has a memorable start (Book I: The Robe, Chapter I, 'The Republican'): "He was born with the gift of laughter and a sense that the world was mad. And that was all his patrimony. His very paternity was obscure, although the village of Gavrillacs had long since dispelled the cloud of mystery that hung about it."
(Summary by Gord)

Reviewer: Timothy Ferguson - favoritefavoritefavoritefavorite - December 31, 2013
Subject: An excellent recording
A strangely Mary-Sueish book in which the hero is excellent at everything. Going in, you need to remember that murder is mortal sin. The reader when the book was originally released would have seen the main character’s temptation to kill the man who murdered his friend as the great obstacle to be overcome. If you go in with the expectations of modern American drama, the author’s clever way of preventing fatal confrontations between the protagonist and antagonist just seem like weird twists.

Reviewer: aimzzz - favoritefavoritefavoritefavoritefavorite - January 27, 2011
Subject: Kudos to Gord Mackenzie
Excellent reading of a great story... I expected an adventure/romance & was surprised to find philosophical & political discussions interspersed throughout the book-- especially at the end, the ambiguities of seemingly clear-cut issues are left for the reader's consideration rather than presenting resolution

Reviewer: mikezane - favoritefavoritefavoritefavoritefavorite - January 20, 2011
Subject: Great story
I really enjoyed this story. Andre-Louie is a young man of noble bearing but unknown birth who is raised by his godfather. When his friend is killed in a duel with M La Tour d'Azyr for having a 'dangerous way of speaking', he swears he will have revenge by making sure his friend's words are repeated everywhere in France. This is part of the spark that starts the French revolution.

However, Andre-Louie is destined to cross paths and swords with M La Tour d'Azyr over and over again, until the spark that started the war between them is finally resolved.

The reader is excellent: different voices based on nature of the character, tone and inflection varying with the mood, and good french pronunciation.